Significance of the Topic

Science began, and for a long time continued, by focusing on inanimate matter. It took the "knower" as a given and tried to determine the nature of the surrounding universe. It would have been at least equally reasonable to begin by examining the knower, in order (among other things) to determine how reliable an instrument that knower might be as an analyst of external reality. When Socrates said: "Know thyself," he surely did not mean "Know the personal idiosyncrasies of Joe Smith or Lisa Schmidt," but rather "Know what it is to be a human being." However, it has not been until quite recently that we have begun serious inquiries into our own nature. We know that the possession of a syntacticized language is what most sharply distinguishes us from other animals, and it is arguable that this capacity forms the foundation on which rest most, if not all, cognitive capacities peculiar to our species. If this is so, we cannot begin to understand ourselves until we have fully understood what syntax is, where it came from, how it operates, and what part it has played and will continue to play in the life of our species.

Recent years have seen a dramatic growth of interest in the evolution of human language, as evidenced by an increasing number of book, articles, and conference reports. Language, however, presents biology with a unique set of problems. Since, despite the ubiquity of communicative systems, no other species exhibits any trait resembling language, comparative methods basic to most evolutionary studies are unavailable. Since language leaves no fossils, there is no direct evidence for any stages intermediate between the absence of language and all the complexities of modern human language. What little indirect evidence can be derived from artefacts or endocasts is open to a wide range of interpretation.

The problems that apply to all aspects of human language are intensified with respect to the structure of sentences. Syntax is arguably the most human-specific aspect of language; despite impressive achievements in lexical and symbolic processing by apes, dolphins, and even parrots, as well as the existence of what has been rather misleadingly called "phonological syntax" in birdsong, no convincing evidence has yet been presented for syntax in other species. One might have expected that syntax, as a part of human cognition, would at least offer clues to its nature by virtue of its relationships with other cognitive capacities. However, its apparent complexity, abstractness, and arbitrariness have led many to regard it as sui generis, largely divorced from all other faculties and perhaps the most striking case of an emergent property in all of evolution.

It is hardly surprising, therefore, that despite widespread agreement that syntax must have some biological basis, there are innumerable and often irreconcilable hypotheses about the nature and extent of that basis. These range from regarding syntax as simply an epiphenomenon of other evolved capacities, or the result of some "propensity to acquire language," to the belief that it derives from a modular, task-specific, innately determined "language organ." Neither extreme seems likely to represent the truth. On one hand, intensive study of syntax over the last four decades has shown it to possess certain universal properties that demand explanation and that can neither be dismissed as vague propensities nor explained in terms of other cognitive factors. On the other, a variety of neuroimaging techniques has shown that far too many brain areas are involved in syntactic processing—areas each of which may be involved in numerous other forms of processing—for there to exist any discrete mechanism dedicated to syntax.

Just exactly where the truth lies between these two extremes has thus far been impossible to determine. The situation has not been helped by the fact that those who have explored syntax most deeply and insightfully have, for the most part, insisted that their object of study was inexplicable in terms of natural selection and must involve either biological mechanisms as yet poorly, if at all, understood, or some kind of macromutational event that biologists would almost universally reject. This, coupled with the abstractness of much syntactic argumentation, has led many biologists to simply dismiss the weight of empirical evidence that four decades of concentrated inquiry into syntax has yielded, assuming, on no factual basis, that such evidence must be flawed or wholly incorrect.

Perhaps the first and most pressing necessity in the field is some sense of collegiality—a willingness to suspend the doctrinally tinged attitudes that seem prone to infect studies of our own species' attributes and to accept empirical evidence from all relevant disciplines, rather than insisting on the priority of one's own.

Establishing common ground for debating these issues—which are, after all, crucial in understanding how modern humans evolved—is a major reason underlying this proposal. An Ernst Strüngmann Forum would provide the natural and highly fertile setting for the proponents of different approaches to the evolution of syntax to resolve, as far as possible, the differences that presently divide them, and to agree on methods and procedures that would generate more and better evidence. A Forum would clarify points of disagreement and serve as a baseline for further debate. Although consensus is not a prerequisite for a Forum, we hope to capitalize on the delicately crafted balance of discussion that is the hallmark of this approach, in an effort to make progress towards a resolution of what has been described as one of the great unsolved problems of scientific inquiry.

The origin of the capacity for human language represents the last major evolutionary transition in which natural selection on genetic variation must have played a role. Overt and covert proto-linguistic capacities in some animals reinforce the idea that the crucial breakthrough was the emergence of syntactic operation on linguistic input and output. This Forum will investigate the nature of human syntax in a form that is linguistically and biologically constrained at the same time. The nature of the selective forces guiding the origin of such a complex trait will be part of the discussion. Since experimentation in this field is strongly constrained by the uniqueness of natural language and the severe regulations concerning human and nonhuman primate laboratory manipulations, we shall take a careful look at what brain imaging, occasional lesion studies, comparative genomics and proteomics, and genetics can tell us about the biological foundations of language. This will be complemented by an examination of deliverables through the analysis and synthesis of real and artificial neuronal networks and embodied communicating agents (robots). In short, we will examine what constraints the various contributory fields set for one another and what kind of synergies there are to help us solve this major conundrum of human intellectual enquiry.

Two primary goals of the Forum will be (a) to clarify points of disagreement and (b) to provide a baseline for further research.

Points of disagreement to be addressed will include, but not be limited to:

Resolving even one of these issues would provide a firmer basis for further inquiry in a field that has remained chaotic, in part because of interdisciplinary problems, in part because of the relative paucity of factual constraints on speculation. Moreover, in some cases, resolution of one issue would carry strong implications for other issues: for instance, a finding of strong interdependence between components of syntax would argue forcefully for an abrupt rather than a gradual emergence; conversely, a finding that such components could have evolved independently of one another would have a contrary implication. Any such results would sharpen the focus of subsequent research, curtailing the "riding-off-in-all-directions" tendency that has long plagued the field.

What kinds of syntactic phenomena must biologists, neurobiologists, and computer scientists try to explain/replicate?

What are the possible biological and genetic foundations for syntactic phenomena?

What can brain imaging and lesion studies tell us about possible syntactic substrates?

Can syntax really be replicated on a computer or in embodied agents, or just the easy bits that do not matter so much? 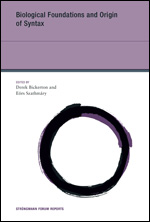