Evolving the Mechanisms of Decision Making

Toward a Darwinian Decision Theory

To initiate an alternative to the existing axiom-based decision theory by developing a theory of decision making founded on evolutionary principles.

In 1654, Blaise Pascal and Pierre Fermat laid the foundation for our current theory of decision making by developing the notion of maximizing expected value. A reasonable organism need only estimate the value of an outcome, weight this value by the probability of the outcome occurring, and choose the outcome offering the highest expectation. This view was formalized mathematically in the 20th century, but for the most part has remained unchanged. Despite the beauty of the theory, its descriptive validity has been plagued by contradictory data. In numerous cases, humans and other animals systematically violate the predictions made by decision theory. They seek risks when the theory predicts that they should avoid them. They prefer immediate rewards when they should wait. They place a premium on items in their possession when trading offers a better deal. In short, decision theory all too often fails to predict behavior.

In the rush to catalog violations of decision theory, economists and psychologists have failed to propose a viable alternative to the existing theory. When they did propose alternatives, they simply patched the existing theory. Whenever a new violation appeared, a new patch was placed on the old theory. Yet repairing the old theory poses two problems: First, having too many patches greatly complicates the theory and suggests that the foundation of the theory is flawed. Second, the original decision theory and its successors ignore two factors critical to understanding decision making: evolution and cognitive mechanisms.

We are, of course, not the first either to attempt a new theory of decision making or to integrate evolutionary thought with cognition. Behavioral economists are interested in theoretical progress, but as mentioned previously, they offer only a repair of the existing decision theory rather than a fresh rethinking of the theory. Neuroeconomists look for decision making in the brain, but rarely consider evolutionary perspectives. Evolutionary psychologists are interested in studying human cognition from an evolutionary perspective, but they do not try to build a general theory of decision making, and they seldom focus on cognitive mechanisms.

A Strüngmann Forum offers a unique and powerful opportunity to initiate a project that integrates a careful understanding of evolution with precise models of cognitive mechanisms to develop a Darwinian Decision Theory. This Forum would allow us to bring together experts in evolutionary theory, anthropology, behavioral ecology, decision theory, cognitive psychology, neuroscience, computational modeling, artificial intelligence, and robotics to hash out the evolutionary principles relevant to the mechanisms of decision making. We, of course, do not expect to fully construct the theory during the Forum, but bringing together expertise from these areas will allow us to more finely tune the approach needed to develop such a theory. To this end, there are four key components that must be examined: understanding the origins of the mechanisms, exploring why these mechanisms are robust, accounting for variation between and within individuals, and responding to uncertainty in the environment.

A core component of this approach is to study decision mechanisms, not just the decisions themselves but the processes involved in making decisions.  Importantly, we would like to investigate the evolution of these mechanisms.  As such, there are a number of key questions one must ask about the nature of evolution and how natural selection can act on decision mechanisms:

Biological systems must remain robust to the myriad perturbations they face in their environment. Decision making is a biological system, but the principle of robustness has not been systematically applied to decision mechanisms. Here, we will bring together biologists and computer scientists, who study robustness independently of one another, to explore questions of robustness with psychologists and neuroscientists:

The amount of variation seen in nature offers a puzzle for evolutionary theory, which often predicts a single best solution or small set of best solutions to an adaptive problem.  We observe individual differences in behavior across a broad spectrum of species and in a wide range of contexts. In addition, within individuals we see frequent variation in behavior.  Both between- and within-individual variation greatly exceeds that expected by evolutionary theory, and understanding the role of this variation will be important in developing a theory of decision making.

In the past, social evolution has been analyzed using tools such as evolutionary game theory. These tools have neglected the cognitive mechanisms required to implement these decision strategies. For instance, strategies such as tit-for-tat have rarely been observed despite their strong theoretical appeal. This group will explore how social cognition and social learning inform models of social behavior and the evolution of culture:

Evolution And The Mechanisms Of Decision Making 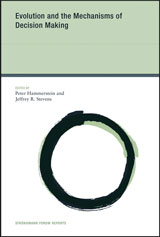