Rethinking Global Land Use in an Urban Era

Three important trends are reshaping land use locally and globally: urbanization, the growing interconnectedness and integration of economies and markets, and the emergence of new land-related agents. By 2050, the world population will increase by 2.7 billion, most of whom will live in urban areas. Concomitant with this transition towards urban livelihoods will be changes in diet and land use. Income gains associated with urbanization increase the consumption of elite goods such as meat products, and multiply the current indirect pressure on agricultural and pasture land (DeFries et al. 2010). At the same time, recent projections show that an area the size of Spain, Portugal, France, and Italy combined could be lost directly to urban land conversion by 2030 (Seto et al. 2011). Although societies have been connected for centuries through trade and commerce, the process of globalization is being accelerated by real-time information and communication, large-scale foreign investments, new forms of transnational governance, and migrations. International investments in agricultural production, urban real estate, and ecosystem services are changing the nature of land use. Urbanization, growing interconnectedness and the responses they generate introduce a host of new agents to land use and land governance, who no longer operate at the local and national scales, but now also at the global scale.

The magnitude and rate of change in these trends, as well as their simultaneity, requires us to re-think and re-examine land change (Lambin and Meyfroidt 2011). There is growing concern that there will not be enough land to meet societal and ecosystem needs, and that many land uses are competing for the same space. Land change science has developed over the last thirty years and has made significant progress in advancing our understanding of land use dynamics at various temporal and spatial scales (Turner et al. 2007). Increasingly, studies acknowledge the complexity of human-environment systems, thereby improving the conceptual platform for land change studies. Drivers of land use change have been systematically studied, primarily through local case studies and empirical modeling.

Despite these advances, much remains unknown, especially with regard to the land use impacts of the current trends in urbanization and globalization. Absent from current land change discussions is a framework that examines the tradeoffs between land uses and agents of change at the global scale. Given that the three aforementioned global-scale trends are rapidly changing the nature of land use and the underlying conditions on which decisions about land use are made, a re-orientation of land change science that explicitly considers these is necessary. Such a new conceptualization would need to understand the linkages between land uses across geographic space and across time. For example, how does urban development and associated loss of agricultural land in one region drive the expansion of agricultural production and deforestation in another area? Here, the concepts of “virtual land trading” and “land teleconnections” may be useful for developing methods and metrics that allow for full geographic and temporal accounting of the connections among land uses. However, our current approaches limit us to frameworks that ignore the connections between land uses in distant places.

A long standing issue regarding land is the tension between the need to use land for societal benefits (e.g., to grow crops, graze, to provide land for cities and settlements, or the source of natural resources such as wood) and the need to conserve land (e.g., for wildlife habitat, forests, use by future generations, or provision of ecosystem services). With a growing human population and an ever increasing demand for resources that require land, there are also mounting conflicts among different uses of land. It is estimated that only 17% of Earth’s surface has been “untouched” by human influences (Kareiva et al. 2007). How much land is required to provide living space for the estimated 10 billion people that will inhabit Earth by 2050 versus the amount of land needed for agricultural to feed the world’s people? How is the amount of land required for agricultural production affected by where agricultural land will be available? How does the increasing use of land for biofuel production affect the competition for land? If human settlements continue to occupy and expand into fertile agricultural lands, what ecosystems and regions will face additional pressure as agricultural production necessarily spreads out into forests, savannas, and other ecosystems? How does need to mine land for ore conflict with the location of human settlements and cities?

Although the optimal allocation of land uses may be calculated economically (Lopez et al. 1994) or mathematically (Aerts et al. 2003), in reality local institutions, governance regimes, and cultural context largely determine land use. However, the stakeholders for land use, land governance, and land finance increasingly operate at global scales. Sovereign wealth funds such as state-owned investments have been on the rise, in excess of 3 trillion USD (Kern et al. 2007). Governments around the world are beginning to recognize the value of land, especially fertile farmland, and are buying land abroad. Saudi Arabia is buying up farms in Ethiopia; South Korea is buying farmland in the Sudan; China is investing heavily in palm oil plantations and transportation infrastructure in the Congo (Doriye 2010). Investors are not limited to country governments. Western banks such as Morgan Stanley and Goldman Sachs, and BlackRock Inc., one of the world’s largest asset management companies, have all invested in African farmland (Robertson and Pinstrup-Andersen 2010). These emerging trends in finance are creating a globalized land market. On the other hand, we see new efforts to govern land use at the global level, for example through codes of good practice on land acquisitions and transparency initiatives in the mining sector. Previously local and national movements have formed transnational coalitions and advocacy networks, such as Via Campesina and the emergent forest rights agenda (Sikor and Stahl 2011). These global agents are interacting with local and national actors in ways that often have unintended social and environmental consequences, such as conflicts due to competing land uses or a failure in the equitable sharing of benefits. We are also witnessing new forms of cross-scale, hybrid governance radically different from the land institutions we know from the past.

The Forum will contribute to develop new perspectives and tools to better understand challenges and opportunities for sustainable land use in the 21st century. Although the need for this type of dialogue has been expressed by research communities in the natural and social sciences, and by science and policy communities, this has yet to be realized. As such, this presents a unique opportunity for the Forum to bring together not only disparate research communities from the natural and social sciences, but also from different policy and practice communities.

Land is an increasingly scarce resource for which there is growing international competition.

The accelerating globalization, the increasing demand for animal protein in the diets and the global scarcity of land has led to increasing decoupling of land use and local demands for food.

Rethinking Global Land Use in an Urban Era 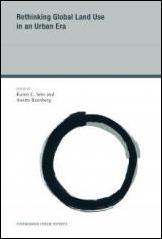