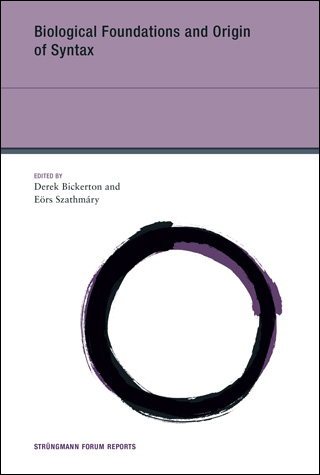 Syntax is arguably the most human-specific aspect of language. Despite the proto-linguistic capacities of some animals, syntax appears to be the last major evolutionary transition in humans that has some genetic basis. Yet what are the elements to a scenario that can explain such a transition? In this book, experts from linguistics, neurology and neurobiology, cognitive psychology, ecology and evolutionary biology, and computer modeling address this question.

Unlike most previous work on the evolution of language, Biological Foundations and Origin of Syntax follows through on a growing consensus among researchers that language can be profitably separated into a number of related and interacting but largely autonomous functions, each of which may have a distinguishable evolutionary history and neurological base. The contributors argue that syntax is such a function.

The book describes the current state of research on syntax in different fields, with special emphasis on areas in which the findings of particular disciplines might shed light on problems faced by other disciplines. It defines areas where consensus has been established with regard to the nature, infrastructure, and evolution of the syntax of natural languages; summarizes and evaluates contrasting approaches in areas that remain controversial; and suggests lines for future research to resolve at least some of these disputed issues.

"This book continues the debate between those who see the core rules of syntax as the result of biological evolution and those who stress cultural evolution atop more general brain functions. To this reader, the chapters enriched by consideration of brain and computation swing the weight of evidence to the latter camp."